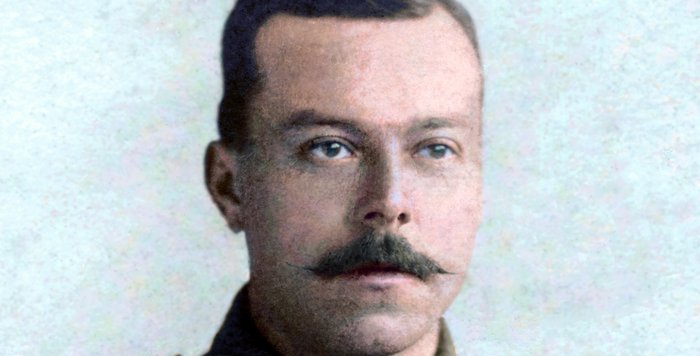 I first became interested in Alfred's story following the research my parents had undertaken over 20 years ago. One of their great successes was to find Alfred's final resting place: Roclincourt Military Cemetery. I visited the grave with them as a teenager, which was an experience that had a profound effect; here was a tangible and tragic link back to the First World War. Several years later, I decided to try and write an article that would detail Alfred’s possible career and present this to his son and my grandfather, Les. He had only known Alfred as a baby. I succeeded in this task, although, looking back, it was a very rough and ready effort.

I returned to Alfred's story four or five years later as a great deal more information about the Machine Gun Corps had become available on the internet, while the advent of satellite mapping from sites like Google Earth offered the slim but exciting chance of finding the location where he fell. Through some detective work in the National Archives and on the internet, I managed to do this (I think). As a family, we then travelled to France and found the field where Alfred fell. We also re-visited the grave. Sadly, I could not tell my grandfather about these discoveries or share the experience of our trip as he had died shortly after I had written my first account of Alfred's story.

Today, I am still learning more details about Alfred's past. For example, I was recently able to join some of the dots regarding his record company and what his role as a music manager would have been. In this I must offer a big note of thanks to Norman Field for helping me as his work in the field of early British records is superlative. In the meantime, if my research into Alfred Adams has taught me anything then it is this: the implications of war and loss can last for decades and across generations. Finally, it is worth reiterating that family history is always an ongoing process with twists, turns and frequent surprises. No chapter from a family’s past can ever really be called closed.

Who lies beneath this mound of clay

Lived once and saw the light of day.

Removed from all who loved him best

Here he lies peacefully at rest.

Troubled no more by passing time

Lies quiet this grandfather of mine.

Removed from gas and from the mud,

Amidst the poppies now, not blood,

You lie with comrades, not alone

And time has tempered grief and stone.

Your gift of life to us lives on,

You - not forgotten – never gone.

Alf was married, with two children and a bright future ahead of him. He went to France, did his duty and was killed in the process.

The importance of Ernest