Circa 1896: Fleet Street to the Strand 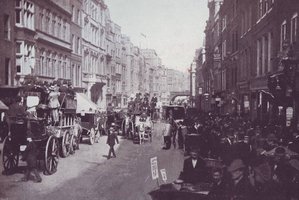 Fleet Street 1896: The very centre of the newspaper enterprise of England can be marked on the London map very near the middle of Fleet Street – or on the spot shown in this view. Within half a mile from this point some of the greatest newspapers in the world work and think for millions of readers. Good, honest, hard work is done in and about Fleet Street and goes forth to the whole English-speaking race. Fleet Street might also be called the nursing mother of English literature. Shakespeare, Ben Jonson, Raleigh, Dryden, Johnson, Goldsmith, their names brilliant even in brilliant times, are closely associated with this famous street. A tavern street, as well as a literary centre, Fleet Street was and is. The newest national newspaper and the older style tavern still jostle each other now as they did a century or more ago. 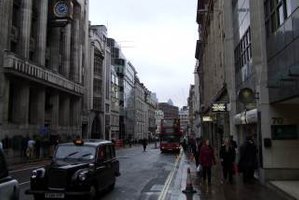 Fleet Street today: Britain’s newspapers moved out of Fleet Street long ago, although its legend lives on and the UK press is sometimes collectively known as 'Fleet Street'. Few of the buildings in the Circa 1896 image  survive. In fact, it was quite hard to find the location where the late Victorian photographer had stood; I had to use the buildings near Ludgate Circus as my guiding point and work my way back. A number of the old taverns still continue to pour their pints, although mostly to city workers, rather than sub editors, writers and hacks. This includes the world-famous Ye Olde Cheshire Cheese. One structure of great worth built since the Victorian era is the sleek and shining black art deco building that once housed the Daily Express. It still has the power to turn my head every time I pass it. 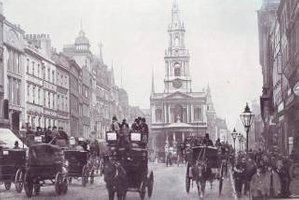 The Strand circa 1896: This famous thoroughfare stretches from Temple Bar to Trafalgar Square and was so named because it skirted the bank of the river, which is, however, now concealed by buildings. From early morning to past midnight the Strand is more frequented than any other London street. As all the world knows, it is the locality of the principal theatres, the law courts, the Inland Revenue Department, and not a few important newspaper offices, and many of the best shops. Entering the Strand from the east and passing the law courts and the site of Temple Bar, one comes to the church of St Clement Danes in the centre of the Strand, which was erected in 1688 from the designs by Wren. The tower, 115 feet in height, was added by Gibbs in 1719. The building is fine of its kind, but not extensive and it stands, as it were, in the centre of the roadway of the Strand, in line with the houses that form the southern side of Hollywell Street. 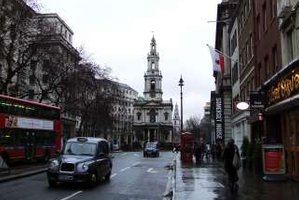 The Strand today: Getting this shot was difficult. I would have been mown over by the traffic if I'd taken it  exactly where my late Victorian counterpart had stood. I like St Clement Danes, primarily because it is such a strange place – one of London's busiest thoroughfares – on which to build a church. Indeed, the traffic coming down the Strand can be horrendous, with jams stretching its entire length. The problem is exacerbated by road works that finish at one point to then spring up at another.  Overall, the Strand still has  cachet with visitors and this is reflected in its character: higher-end hotels, theatres and drinking holes  abound. One of the greatest hotels of the late Victorian age, the Savoy, underwent a complete overhaul a few years ago. The theatre attached was made famous in the late-Victorian period by Gilbert and Sullivan. The Aldwych Theatre and the Lyceum can also be found on the Strand. Both were renowned in the late-Victorian era. 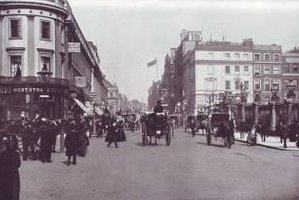 The West Strand circa 1896: From early morning to past midnight the Strand is more frequented than any other London street. As the world knows, it is the locality of principal theatres, the law courts, the Inland Revenue Department, and not a few important newspaper offices and many of the best shops. The above view shows the extreme western part of the famous thoroughfare, just opposite Charing Cross station, part of which is seen immediately on the right. On the left has seen the West Strand Telegraph office, one of the busiest in all London and whose operators could tell many a romantic story. The general aspect of this particular part of London is animated in the extreme. In the evening, the footpath on the right just outside Charing Cross station is occupied by a more or less regular road of energetic new tenders and somehow, standing here, one feels that one is in touch with the whole civilised world. Traffic is prodigious for all the ‘buses stop here and ‘butterfly’ cabmen drive slowly past in the hope of picking up a fare at this busy spot. 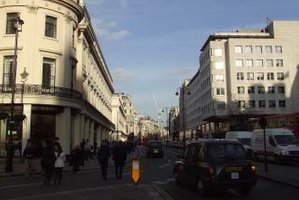 The West Strand today: This part of the Strand is still one of London’s busiest streets, with Charing Cross station disgorging commuters in the morning and hoovering them back up in the evening. The ‘wall of red’, the descriptive term for a jam of London buses, frequently occurs at this spot. From looking at the image of today, we can see that almost every other vehicle is a worker’s van or a black cab. Meanwhile, notice how the Londoners of circa 1896 casually stand in the middle of the road as the traffic trots past. Today, only those tired of life would jaywalk as our American cousins might say. The building in which the telegraph office stood remains and is relatively unchanged on the outside. Telegraphs in the late-Victorian period were expensive but far quicker than sending a letter, of course. They could also be sent great distances – across countries and continents – which has led some to describe the telegraph system as the Victorian internet.

Charing Cross Station circa 1896: At Charing Cross we have two railway stations within a stone’s throw of each other. One of these is the west end terminus of the South Eastern Railway, and the other is a station on the Metropolitan District Railway. The former was built about the year 1863 and, with the vast building forming the booking office and Charing Cross hotel, it covers a very large space at ground. In the centre of the enclosure facing the Strand and in front of the hotel and entrance to the railway station there is a handsome and elaborate cross in the decorated Gothic style on 13th and 14th centuries erected in 1863. It is built on or near the spot where on, if tradition be correct, formerly stood the cross erected by Edward I in memory of his wife Eleanor. ‘Wherever’, it is said, ‘Elenor's corpse rested on its transit from Grantham to Westminster Abbey, Edward erected across in memory of her.’ The ornate monumental cross shown in the above view is about 70 feet high and cost between £1,700 and £1,800.

Cross Station today: Okay, so the absence of the monumental cross in today’s photo hardly helps, although I can assure you it’s still there behind that mass of scaffolding. Indeed, the restorers finished the painstaking work of wiping away over a century’s soot and grime a few years ago. Still, I will try and update this photo when I'm next in town. Charing Cross station remains busy and this made more so by the advantage it affords  commuters by taking them right into the heart of London. However, it's an  extremely limited space at about one quarter of Waterloo’s size. Today, the late Victorian gothic-style roof has gone to make way for an extra floor or three, while the ‘American Exchange’, located on the right hand side of the 1896 image, is now the site of an Evening Standard newspaper point. You’ll also notice an old Routemaster bus in today's photo; this type of vehicle operated in London for decades, but now only serves the No.9 route if memory serves me well. Routemasters were cramped and probably considered a health and safety inspector’s nightmare. However, they were much loved by the public and were considered as iconic as red letter boxes and telephone booths.

'Getting this shot was difficult. I would have been mown over by the traffic had I taken it exactly where my late Victorian counterpart had stood'