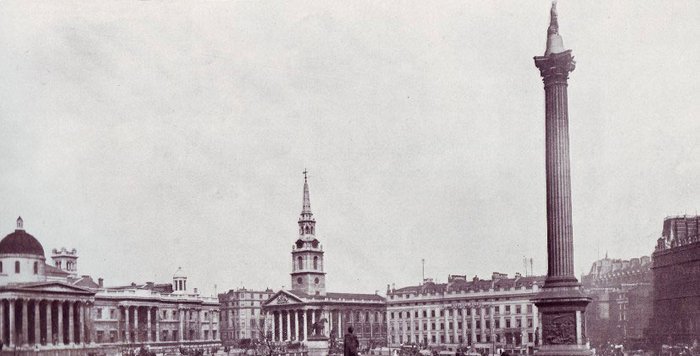 Circa 1896: around Trafalgar Square

Trafalgar Square circa 1896: This splendid square was named in honour of Nelson’s last victory, which destroyed the French and Spanish fleets, and effectively put an end to Napoleon’s intended invasion of England. The Nelson Column, erected on the south side of the square by public subscription, is said to be of the exact proportions of a column of the Corinthian Temple of Mars Ultor of Rome. It is built of Portland stone, 145ft in height, and was erected in 1840-43. Upon a circular pedestal above the abacus is a colossal statue of Nelson, 17ft high. The figure was carved out of three massive stones, of which the largest weighed thirty tons. The capital of the column is of bronze, obtained from cannons captured by Nelson. There are also bronze reliefs on the four sides of the pedestal. Four immense lions in bronze guard the foot of the memorial. Upon either side of the Nelson monument are statues of Sir Charles Napier and Sir Henry Havelock. The fountains in Trafalgar Square were designed by Sir Charles Barry. In the above view is also seen the famous Royal parish church of St Martin’s-in-the-Fields.

Trafalgar Square today: Not really the right angle, but the best I could do from street level. Given that this is a space to celebrate Britain’s imperial heroes, I've always found it somewhat ironic that so many protests against the establishment end up in Trafalgar Square. Most likely this is due to its centrality and because it is such an iconic place. The fourth plinth – a space  left empty for the installation of a statue of William IV that was never made – holds various art installations that vary from  being good, to bad, to ugly. The square also hosts concerts and cultural events, many of which are entertaining, although nearly always over-crowded. If you can get a good spot, and are prepared to accept the hustle and bustle, I think Trafalgar Square is pretty unbeatable for crowd watching. And when it gets too much, you can always visit the National Gallery or National Portrait Gallery that are free to enter.

Haymarket theatre circa 1896: On the east side of the Haymarket, opposite Charles Street, stands the Haymarket Theatre, which dates from the year 1720, when an enterprising carpenter, named John Potter, built a small playhouse in this street on the side of the King's Head Inn. In 1820 the old edifice was pulled down, and the present building erected on almost the same site from a design by John Nash. The entrance is through a handsome portico, the entablature and pediment being supported by six Corinthian columns; above are circular windows. Under the portico are five doors, leading respectively to the boxes, pit, galleries, and box office. It was almost entirely rebuilt in 1878.

The Haymarket theatre today: Although I’d lived in London for many years, I cannot remember ever seeing a show at the Haymarket, although I probably did once at some point. The portico is still impressive and not much appears to have changed to the frontage other than a lick of paint, obliterating the crown motif in the circa 1896 photo. Look more closely at the ‘then’ photo and it’s possible to see that the show ‘Fedora’ was playing. An interesting but useless fact here: the play was written in 1882 by Victorien Sardou for the great Sarah Bernhardt, which was first performed in the USA in 1889. Bernhardt wore a hat similar to what is now known as the fedora. So the play came first, not the hat!

'Upon a circular pedestal above the abacus is a colossal statue of Nelson 17ft high. The figure was carved out of three massive stones, of which the largest weighed thirty tons'